I arrived in Minneapolis on Tuesday evening, 23 September. On Wednesday I did some sightseeing in Minneapolis and St. Paul, then bought food, water, and a few supplies for my trip. Thursday morning I took a taxi to a boat ramp I had found on Google Maps. The ramp in North Mississippi Park on the north side of Minneapolis is right at the beginning of the navigable portion of the Mississippi River at river mile 858. Just above it is Coon Rapids Dam which doesn’t have a lock and is therefore impassable to boats.

I unloaded my kayak, gear, and supplies from the taxi. The driver asked if I wanted him to pick me up later. I said no, I’m paddling to St. Paul today. He left. I looked at my pile luggage and wondered if I should have gotten his phone number.

I assembled my kayak.

It took about two hours to assemble and load my kayak, and I pushed off just before 10:30 am. It was a cloudy but warm morning and the river was like plexiglass – more like a calm lake than a river. There was little to no current on the river the entire week I paddled on it. The Mississippi River from Minneapolis to St. Louis is more like a series of lakes than a river. There is a dam with a lock every few miles. When I was there in late September there would be a bit of current just after each dam, then nothing. If I stopped paddling I would usually start to drift back up the river because there often seemed to be wind blowing upstream.

Soon I could see downtown Minneapolis ahead of me.

The first lock (more information about locks on the Upper Mississippi River is here) is in downtown Minneapolis. Upper St. Anthony Falls Lock drops about 48 feet and has the biggest drop of any of the locks on the Mississippi. This is what it looks like when it’s full.

And this is what it looks like after the water has drained out.

A few hundred yards below Upper St. Anthony Falls Lock is Lower St. Anthony Falls Lock. It took about an hour to get through both locks. Not far below the locks was a nice beach so I stopped for lunch – two bananas, half a bag of carrots, and a Nutella and almond butter sandwich. Then I continued on to St. Paul. It was a beautiful Fall day with temperatures in the 70s. The leaves were starting to turn color.

Mid afternoon I locked through Lock No. 1, which is actually the third lock – Upper and Lower St. Anthony Falls Locks aren’t numbered. I arrived in St. Paul at about 5:00pm.

I left my kayak at the yacht club and walked to a hotel downtown. There is not much activity in downtown St. Paul on a Thursday evening – even most of the restaurants close at 5pm.  Senor Wong – a Chinese  taco place – was highly recommended (as the only restaurant within walking distance that was open) and it was pretty good.

At 7:30 on Friday morning I was back on the river. It was a warm morning. South of St. Paul is very scenic with many interesting industrial plants and barges lining the shores of the river. This continues for several miles. Then the river becomes a large lake. I had seen very few boats up until this point, but as I approached Hastings on Friday afternoon boat traffic started to increase (all power boats – I only saw one other kayaker while I was on the Mississippi).

Just before Hastings is Lock & Dam No. 2.  As I approached the lock a couple in an anchored boat told me a barge was coming through the lock and there was a two hour wait. The river banks were rocky and there was nowhere to land. A strong wind was blowing up the river. I’d been sitting in my kayak all day and really needed to stand up. For two hours I sat there, getting blown up the river, paddling back down, then getting blown up the river again.

I finally locked through at dusk. I paddled down the river looking for a place to camp.  I found a place  just below Hastings as it got dark. The mosquitoes were thick and I couldn’t find my insect repellant. I ate a quick dinner and climbed into my tent.

At first light on Saturday morning the hunters began shooting. For once I was glad I wasn’t a duck. I was on the river at 8:30.  Soon I was at the junction of the Mississippi and St. Croix rivers, and instead of having Minnesota on both shores of the river, Wisconsin was now on the east shore.

Saturday was another beautiful day in the 70s, and the scenery was quite scenic. But the river was like a freeway with power boats going full throttle in both directions. I paddled near the bank to keep out of the traffic. When I stopped for lunch a big wake washed over my beached kayak and flooded into the cockpit. Later in the day I passed a large sign pointing up a side channel to a casino, and all the boats were turning off towards it.

Just upstream of Red Wing I locked through Lock # 3 with several other boats. Red Wing (home of the boots) was fully booked for the weekend so I camped south of town. I still couldn’t find my insect repellant. From my research I knew mosquitoes aren’t a problem in Minnesota in the fall. I’m glad I wasn’t there in the summer.

It was a warm night – I didn’t need my sleeping bag. In the morning it took me about an hour and a half to get everything packed in the kayak and I left at about 8:30. Ahead of me was 35 miles of Lake Pepin. By late morning it was close to 80. Many people were out enjoying what would probably be the last warm weekend of the year. I paddled near the channel buoys so I wouldn’t lose my way.

I made it to Lake City at 2:30 and left my kayak at the city marina. After lunch I found a hotel. It was a very warm afternoon so I went for a swim. By the time a got out of the pool the wind had picked up and it had cooled off.

When I woke up the next morning it was cloudy, windy, and cold. There were whitecaps on the lake. I loaded my kayak, put on a wool shirt and windbreaker, and left the dock at 8:30. At first the wind was at my back and I flew down the lake. But there was a wide bend in the lake and as I went around it the wind was at my side and then in my face. I paddled hard and slowly moved ahead. Finally the lake narrowed and the wind and waves moderated.

Early in the afternoon I passed through Wabasha, and at 2pm I arrived at Alma, WI.

Tuesday was rainy and cold so I stayed in Alma. The forecast was for colder weather so I packed up my boat and headed home. 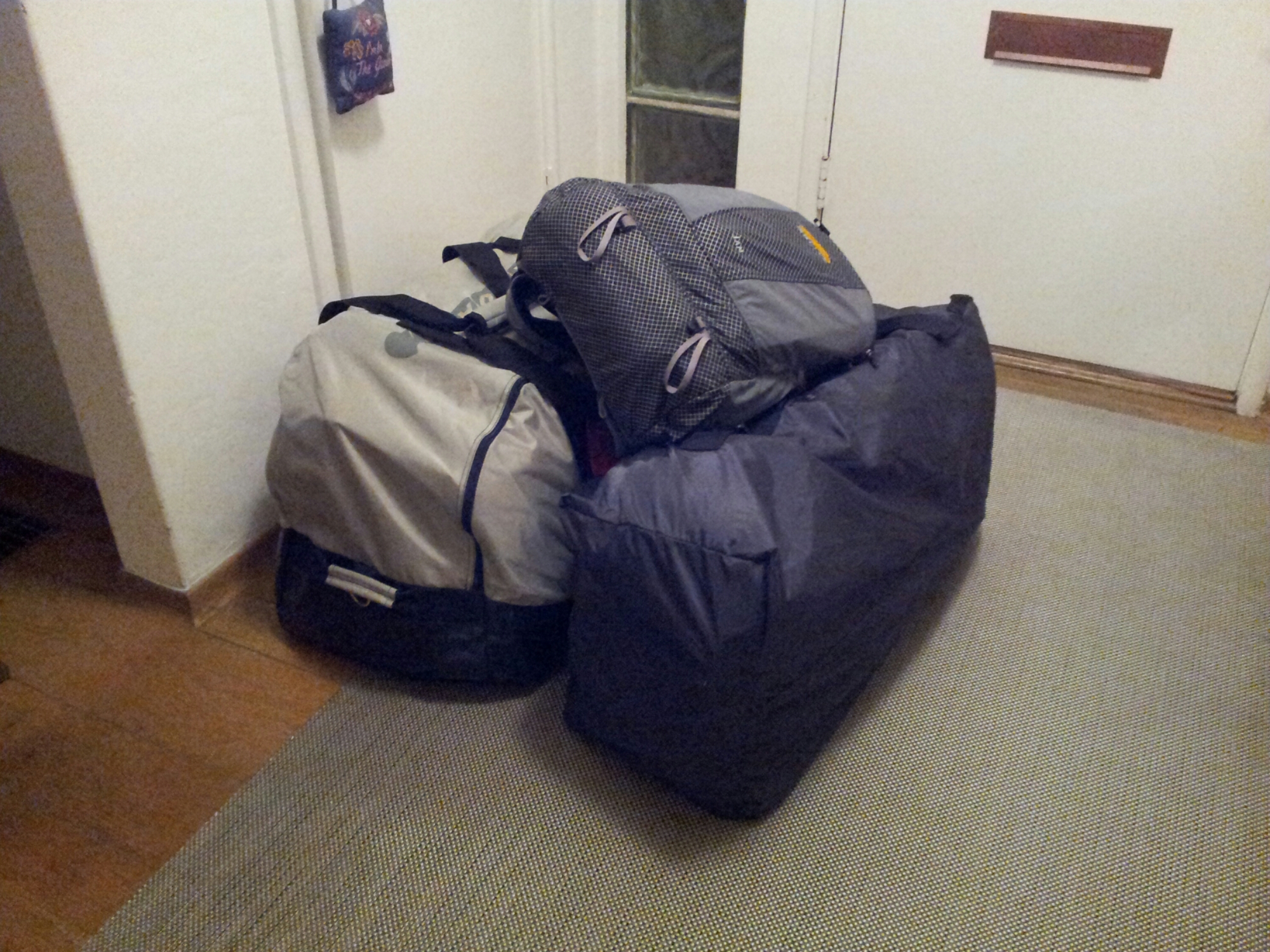 The bag on the left is my folding kayak, on the right is all of my gear – paddles, lifejacket, tent, sleeping bag, etc. – and on top is my backpack with clothes. 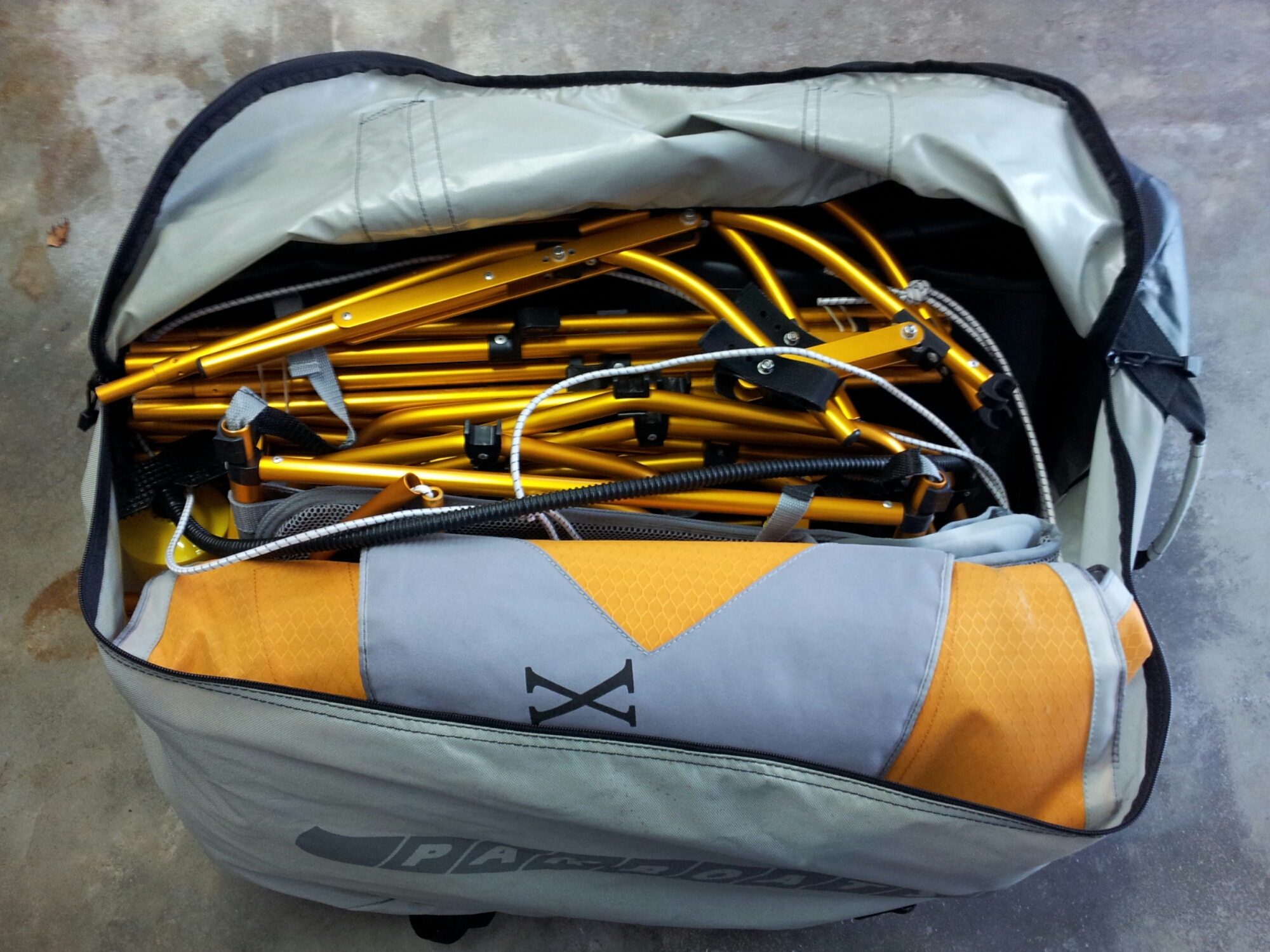 Here is what the boat looks like packed in the bag.

I’ll be paddling a folding kayak. I’m starting in Minneapolis. If the kayak actually floats with me and all of my gear I’ll go to St. Paul (about 15 miles). If I have an acceptably good time and the weather remains fine I will continue on from there the next day. I’ll keep going until I get too tired, or the weather gets too cold, or I stop enjoying the trip, or I run out of time. You can follow my daily progress on the Mississippi River Map and in real time on my Spot tracking page.